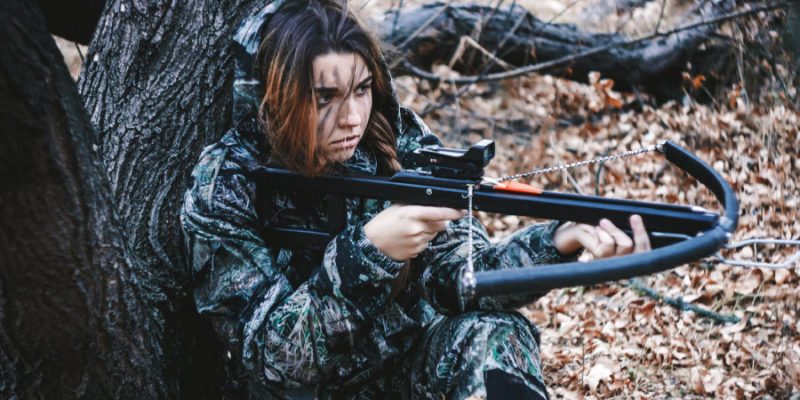 Our best crossbow for women in 2023 is the Bear X. We were desperate to give the title to the Vixen II, but I think that the price tag is simply unjustifiable.

We’ve done our homework, scouring forums, online reviews and manufacturers notes (not to mention having tried a few). All in all we went through some 15-20 crossbows, and finally rounded up the following five in this article:

What to look for in a ladies crossbow?

There’s no doubt that you will get used to carrying a crossbow on hunts however much it weighs. Nonetheless, you can ease yourself in appropriately, and get hold of one that’s 7-8lbs or less. You’ll probably be hunting for hours, and this will take the strain off your shoulders. What’s more, crossbows for women should be lighter. It’s easier to hold up and aim for longer periods of time.

Draw weight refers to the amount of force needed to pull the crossbow string back and cock the device. Crossbow draw weights can fall anywhere between 20lbs and 200lbs+. If you are game hunting, there are legal minimum draw weights permitted,  generally around 35-40lbs. The legal minimum depends on the state you’re in.

I recommend that for a first time women’s crossbow, that you look somewhere in the 35-55lbs draw weight range, depending on your frame size and strength.

This said, many bows now come with cocking devices which will make cocking the bow easy, despite weights of 150lbs+ (normally very difficult!).

Another way to describe the power stroke is the draw length, or the distance between when a crossbow’s string is fully cocked (furthest back), and when it is relaxed at its resting position.

A longer power stroke is usually related to a more powerful crossbow and higher foot pounds of kinetic energy, but this isn’t best for all users. Many want a smaller power stroke which – although still powerful – will make it easier to cock the crossbow ready for action.

What width crossbow to purchase really depends on personal preference, although I’m a big fan of a slim crossbow (particularly when cocked), first of all because it’s highly functional. You’ll glide through trees or spin round in a ground blind without hitting dangling branches or your ground blind chair arm.

What’s more I just think it’s aesthetically more pleasing on the eye, not to mention the reduced weight from having less width to the crossbow. For the best women’s crossbow I’d suggest you look for a cocked width of no more than 14-15 inches, although the narrower the better. Some top of the range crossbows have an incredible width of as little as 7-8 inches.

Different crossbows have different safety features which we have pointed out in the reviews below. A good crossbow will:

Dry fire is when a crossbow de-cocks or releases moving the string violently (when a bolt is not placed. Good crossbows may have anti-dry fire triggers, or nocks which prevent such accidents.

It really frustrates me that to de-cock some crossbows you have to fire the cocked arrow into the ground. Ok, it’s not the end of the world, but I feel like a modern-day crossbow should have this functionality built in.

If you’re just starting, some starter crossbows will have finger placement indicators to help you avoid misplacing your fingers and causing nasty accidents when you fire.

To most this won’t matter, but some ladies like to show off a girly design, and there are some pretty awesome women camos out there. On the crossbows below, we’ll let you know if they have a female camo or a standard unisex design.

Join our community of 2000+ keen hunters, Survivalists & campers for free and receive our best tips

The Wicked Ridge Ranger X2 – a unisex-design crossbow – has been specifically engineered for small-framed individuals, such as women and adolescents.

It’s a 150-pound bow assembly with a safety-first design: a safety engineered pass-through fore-grip and glass-reinforced nylon safety wings ensure that the user’s hands won’t get caught in the bowstring release pass.

It also boasts excellent accuracy thanks to its 11″ Wrx laminated limbs fitted to the riser and limb pockets. The power stroke is more than manageable at an excellent 10.9 inches, making it easier to cock. Despite its smaller frame, it still flies at a solid 330 FPS and punches with 85 foot pounds of kinetic energy.

It’s actually an incredible starter bow for women or young people looking to get into hunting. The downside is that it’s often pricier than many other crossbows on this list. For this reason, we included the bow here, but it didn’t enter our top three.

It’s a unisex, all stainless steel build made in the USA. The nock sensor and anti-dry fire trigger system eliminate nasty dry fire accidents (you can’t shoot the crossbow without a cocked bolt). It also has safety indicators to guide your finger placement.

It’s a fairly powerful mid-range crossbow which flies at 350 FPS with 118 foot pounds of kinetic energy. Despite this, it weighs in at lightweight 6.6 pounds, meaning you’ll find it easy to carry all day.

Don’t worry about the 150-pound draw weight, as it comes with a cocking assist which makes it straightforward and effortless.

Although not billed as a package, it actually comes with everything you need, from our favourite 4×32 premium scope, to a lightweight quiver, two 20-inch Headhunter bolts, and some lube wax.

What we didn’t like here is that to decock the weapon, you must fire it (with a bolt in due to the safety system…). What’s more, we had trouble getting hold of customer service to ask them a couple of questions about the bow. Make of that what you will!

The Bear X is one of our favourite crossbows at Sharpshaft, for its all-round ‘elite’ crossbow specifications, despite its unbelievable price tag. It not only featured amongst our best crossbows for less than $500, but even made our top 10 best crossbows for 2023.

It’s super compact with an underrail hand grip and adjustable butt to make the crossbow fit you. Although it’s lightweight at 7.5lbs and nice and compact at 14 inches wide when cocked, it has a bigger draw weight of 210lbs and a power stroke of 20 inches.

These dimensions help it to achieve a massive 405 FPS which is insane for this price tag. Don’t worry though, the included cocking rope makes loading the crossbow manageable.

The Tenpoint Lady Shadow crossbow – manufactured in the US – was designed specifically for women, by one of the top industry brands.

It has a short power stroke at 12.6 inches, and I like the reduced 13.5-inch width when cocked. It weighs in at light 6.4 pounds, so you’ll have no problems with transportation and fatigue.

This crossbow has a big draw weight of 180lbs, but that’s why they’ve included an ACU cocking device which is built into the crossbow butt. The device makes it possible to cock the crossbow with one finger. Once cocked, they’ve made it so you can nicely tuck away the ropes too, which makes the crossbow look tidy.

These specifications allow the bow to fly at up to a cool 350 FPS.

Aesthetically the bow is obviously for women with hot pink string and cables. I’m not sure every woman out there will want her crossbow to be quite so barbie doll, but despite this, it’s a super-slick design.

This is a package deal with everything you need to get hunting. The 3X Pro-View 2 is a high-quality scope: illuminated in red and green with a brightness you can modify. It also comes with a pack of Magnum XX75 bolts, an ambidextrous quiver mount, a quick detach quiver and an instructional DVD.

I’d say this crossbow competes well with the Vixen II below. Whereas the TenPoint Ladyshadow has more power, the Vixen II is simple, lightweight and efficient.

First things first, the Excalibur Vixen II is so easy to set up. You’ll be ready to go in 15-20 minutes, having followed the manual.

The Vixen II is tremendously accurate. Once sighted in, you’ll be delighted to find it maintains excellent grouping at 50 yards+ (no more than a couple of inches).

It has a fantastic weight at 5.9 pounds. The power stroke – although a little bigger than some other options at 13.5 inches – is very manageable. I personally know a short lady in her 70s who has no problem cocking and firing this crossbow.

The Vixen II fires a 325-grain arrow at some 285 FPS, with about 60 KPFE. That’s enough power for small (or maybe some medium-game) hunting. It is on the low side however, and is certainly not powerful enough for bigger game.

It’s a recurve crossbow, the beauty of which being that you can restring them in the field or at home, without sending it off to a manufacturer or taking it to your local shop to get it restrung. It won’t ruin your trip because you have an issue on your first day.

The Vixen II was discontinued in 2016, although you can still find them being sold on Amazon. To be noted: Amazon seems to be shipping it with a new Deadzone Scope, which is not as high quality as the originally fitted Varizone scope. What’s more, the Deadzone is actually built for higher-FPS crossbows, so we’re a little disappointed in this mismatch/drop in quality.

We liked all these girls crossbows, but we gave the title of the best crossbow for women to the BearX Intense Ready to Shoot Crossbow Package. Why? Because it allows the ladies to level the playing field with the guys, despite the fact it’s a manageable crossbow. Look no further than the price tag too, which comes in far cheaper than the below options.

That said, it may still be daunting for a first-time crossbow, in which case – if the price tag doesn’t put you off – we highly recommend the Vixen II for a light, accurate bow, or the Tenpoint Lady Shadow Crossbow Package if you want something a little more powerful. 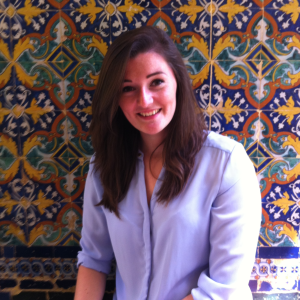 Other articles on Crossbows 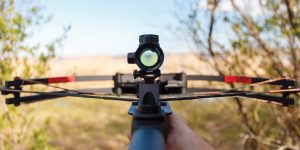 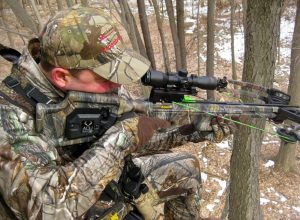 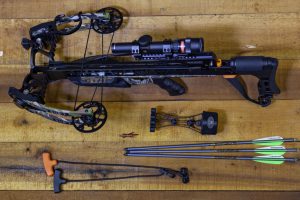 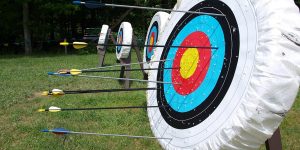 5 Best Crossbow Targets in 2023: Barrels of Abuse (But Not to Your Broadheads) 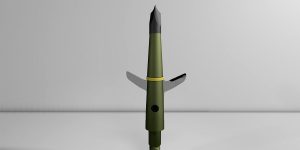 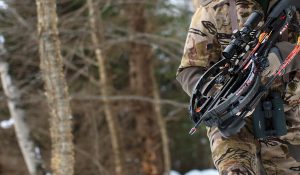 The Fastest Crossbow in 2023: a Wild Shooting Experience 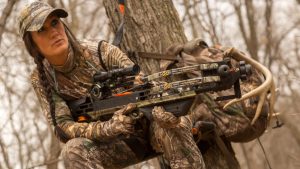 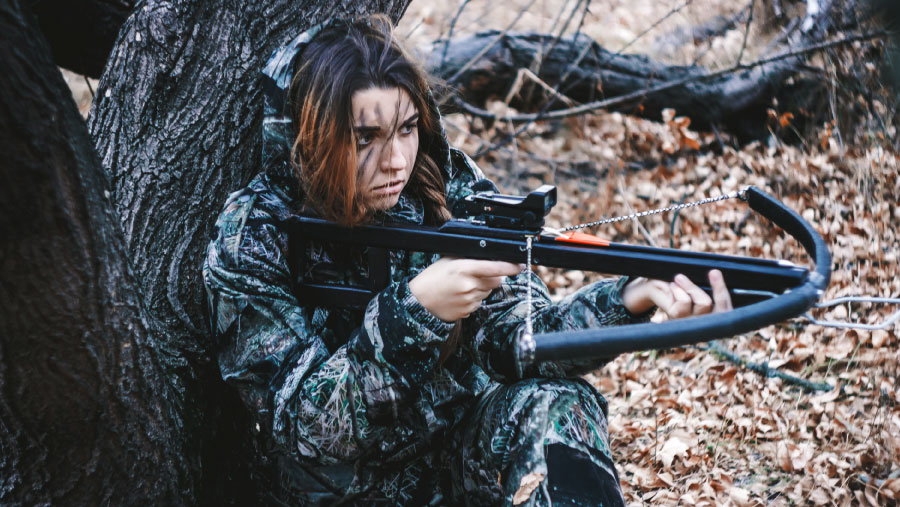 Save up to 40% on Crossbows and Accessories Through Cabela's Bargain Cave!

Cabela’s has filled its Bargain Cave with Massive Discounts on Crossbows, Crossbow Accessories, and other hunting equipment, as well as FREE SHIPPING on orders over $50.